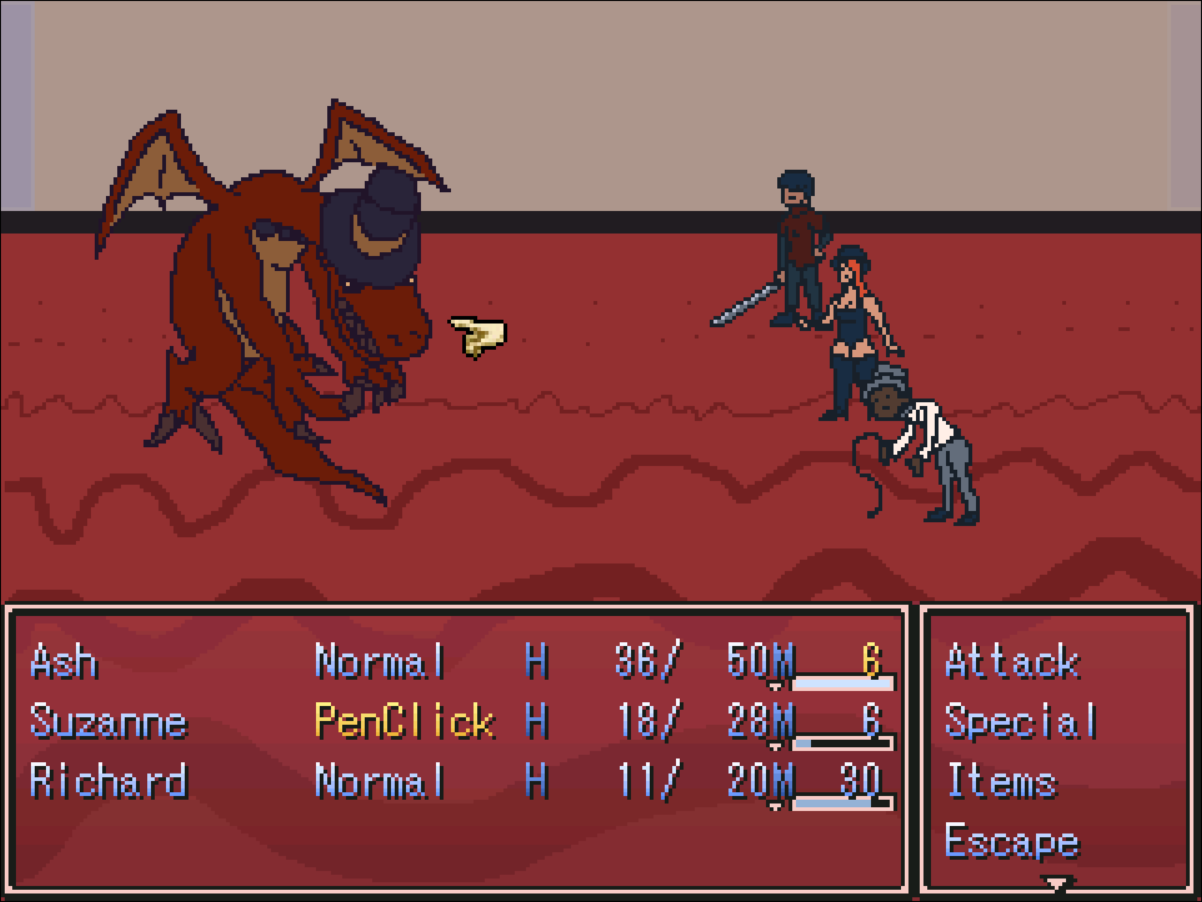 I released a new game this week! It's called Vaudeville & Sword.

It's a short little JRPG made with RPG Maker 2003 about vaudeville performers trying to avert the apocalypse through performance, with a little help from a hired sword. It's funny, it features a ragtime-inspired soundtrack by Claire Schroeder, and you can back into orcs with a school bus.

You can download it for Windows from itch and Glorious Trainwrecks.

The Making of Vaudeville & Sword

Vaudeville & Sword was created for the 2021 Glorious Trainwrecks Sekret Santa Jam. I've been participating in the jam annually since 2016 (time flies!), but I had to skip last year. I nearly skipped this year too due to exhaustion from the most recent semester of my PhD program, but I was encouraged by fizzhog to join and gave in to benevolent social pressure. And I'm glad I did! I hadn't released a video game since Clark Stanley's Van Racer in the summer of 2020, partially because of the PhD, but also because I've wanted to focus my efforts on my primary project, Starlit Jailbird Jam. Having had a fairly consistent streak of creative output from 2013-2020, and peaking in 2019 and 2020, it's felt bad to have gone over a year without releasing anything new. While I've developed a healthier attitude since then, losing creative momentum for the first time in 8 years had felt like a defeat.

So, let me tell you, it feels really, really good to finally be back.

Coincidentally, my gift recipient for this year's Secret Santa Jam was fizzhog, who had encouraged me to join in the first place. I had a month to make the game. The original wishlist included:

The wishlist naturally lends itself to a cast of characters, so my original idea was to make a murder mystery game set on a bus. In the middle of an overnight bus trip, the player would awaken to the driver having been murdered, and it was up to them to interview the fellow riders and figure out whodunnit. As it would turn out, the killer was self-aware that they were a game character, stabbing the bus driver with a stolen pen just to see what would happen.

I had sketched out a story outline for the whole thing, with branching paths and everything. But after 16 days of not actually starting the project, I had realized that it wasn't actually the sort of game I wanted to make. So I went back to the drawing board.

Since the wishlist lent itself to a cast of characters, making an RPG seemed like the next most obvious option. The party of characters would embody aspects of the wishlist - a pen collector, a bus driver, and a paranormal investigator.

I chose RPG Maker 2003 as my engine to pay homage to a lot of the great RPG Maker 2003 games that had influenced me over the years - OFF, Space Funeral, Emrbic of Wulfhammer, etc. While my decision to make Danger Zone Friends and Starlit Jailbird Jam in the more recent RPG Maker VX was similarly motivated, it didn't quite scratch the early aughts itch. RPG Maker 2003 was on sale for $2.00 at some point last year, and this was finally the chance to get some value out of that purchase.

Choosing RPG Maker 2003 made me think about OFF, which meant that I was thinking about the uncharacteristically jazzy instrumentation of its battle music, which, incidentally, is one of my favorite RPG battle themes of all time (seriously, this shit slaps). This lead me to pick "vaudeville" over "bus station" as the game's setting. Claire Schroeder was visiting at the time, was similarly excited by the idea of fusing RPG music with ragtime, and agreed to write and produce the game's music for me. Thanks Claire!

Everything naturally followed from there.

The creative decisions made so far naturally led to the creation of a party of ordinary vaudeville performers whose abilities in battle were determined by their weird hobbies. Suzanne could click and throw pens at enemies and write notes. Bruce would drive into enemies with a bus, slowly back over them, and refuel the bus to repeat the cycle. Richard would search for ghosts with increasing success. Each character would be a walking gag brought to life through the game's mechanics. 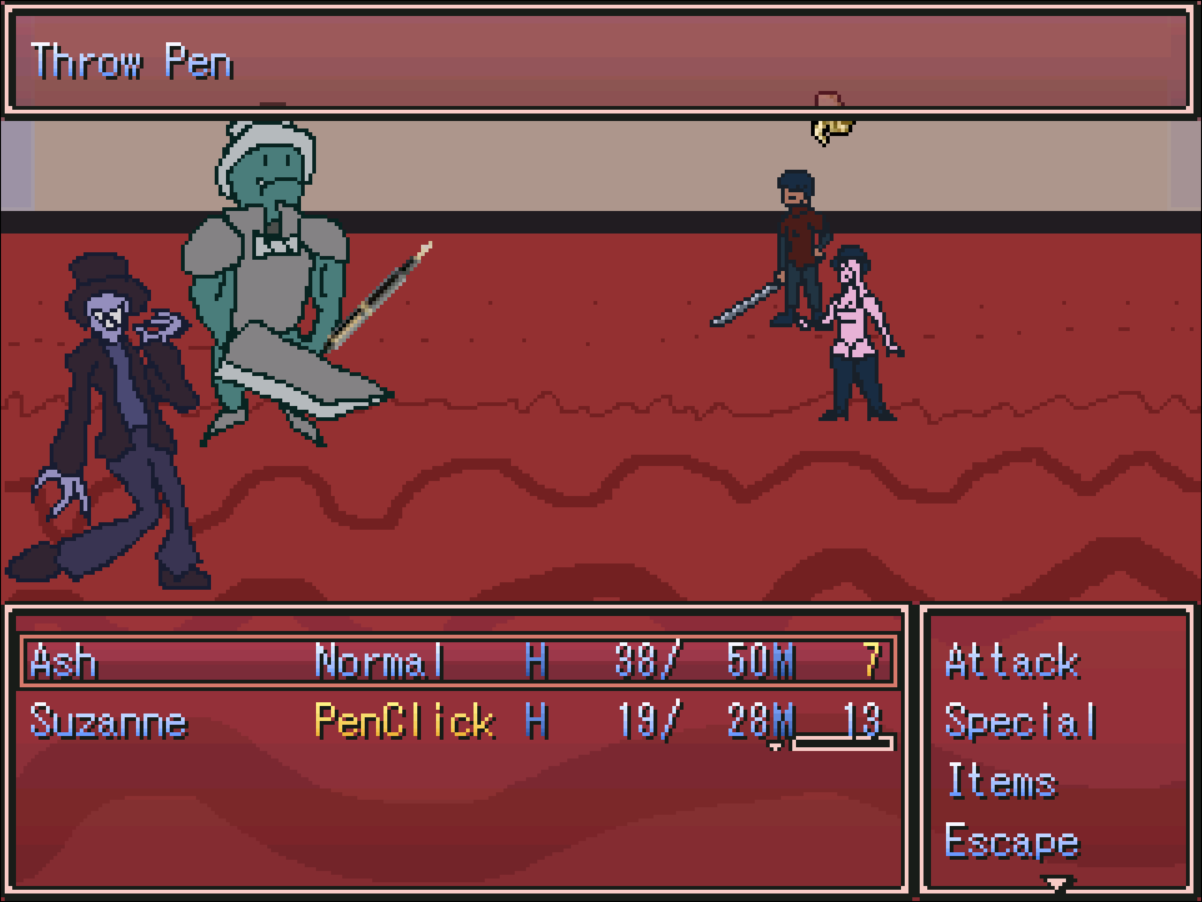 However, to make these characters work as gags, they needed a reference point. So, I decided that the protagonist of the game, Ash, wouldn't be a vaudeville performer, but instead a more typical RPG hero. She has better stats and more useful abilities than the rest of the party - she's stronger, faster, tankier, and more magical. Suzanne can click her pen one turn, throw it the next turn, and deal 7 points of damage to an enemy, but Ash can fire an explosive laser beam in a single term that deals over 20 damage to all enemies at once. In this manner, I hoped to make the rest of the party feel more like they were ordinary people who were, understandably, ineffectual in combat. 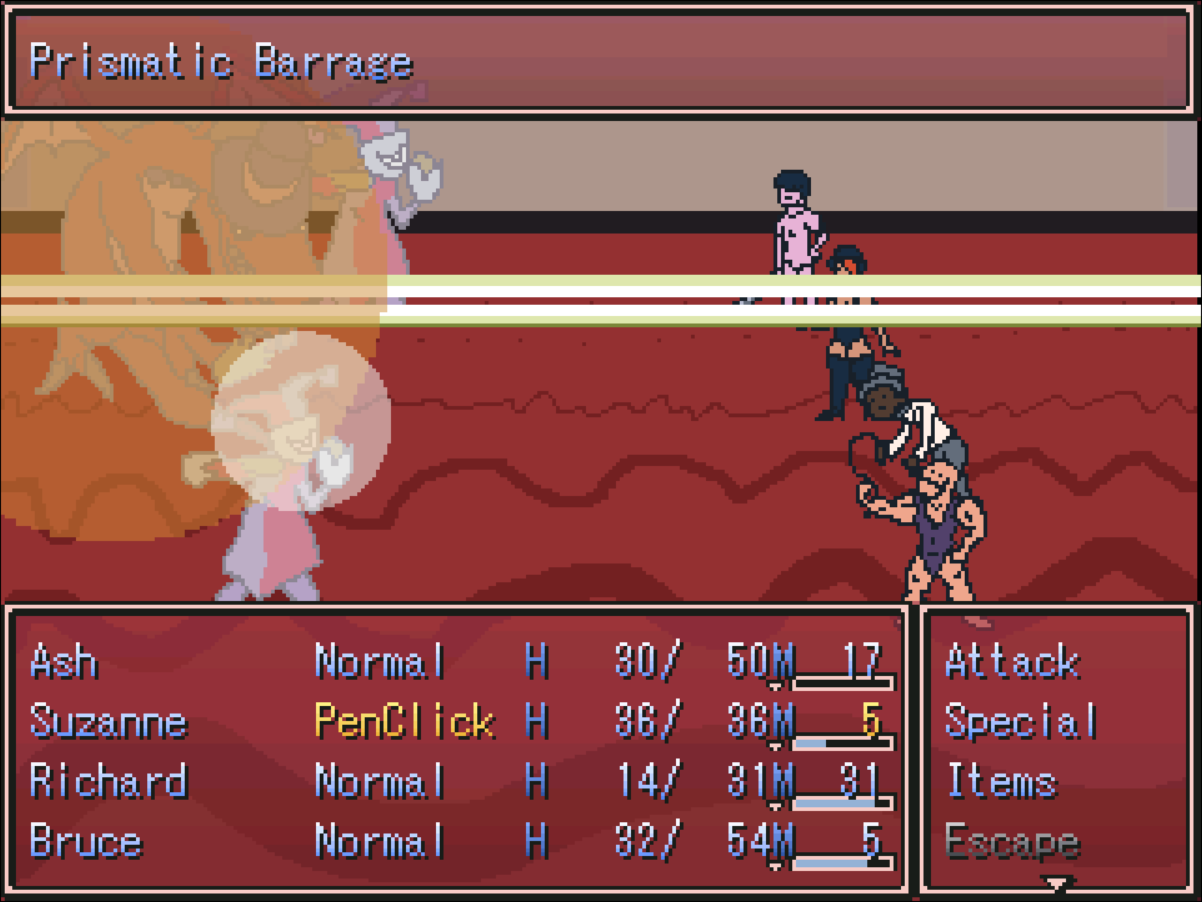 Since I was using a "stereotypical" RPG protagonist, it became appropriate to use more typical RPG conventions. I liked the idea of having a common "language" of sorts between all of my RPG's (being this, Danger Zone Friends, and Starlit Jailbird Jam), sharing similar spells, items, and mechanics, sort of in the same way that all Final Fantasy games have similar rosters of monsters and spells despite occuring in disparate settings. For this reason, I adapted many of the game's battle animations from Danger Zone Friends. The spells that Ash uses are all based on moves from my other two RPG's, items such as "Big Bandages" and "Pick-Me-Ups" are directly carried over from DZF, and most importantly, DZF's shopkeeper, the state dinosaur of Maryland Astrodon Johnstoni, reprises the role here. Astrodon is officially the Cid of my JRPG multiverse. 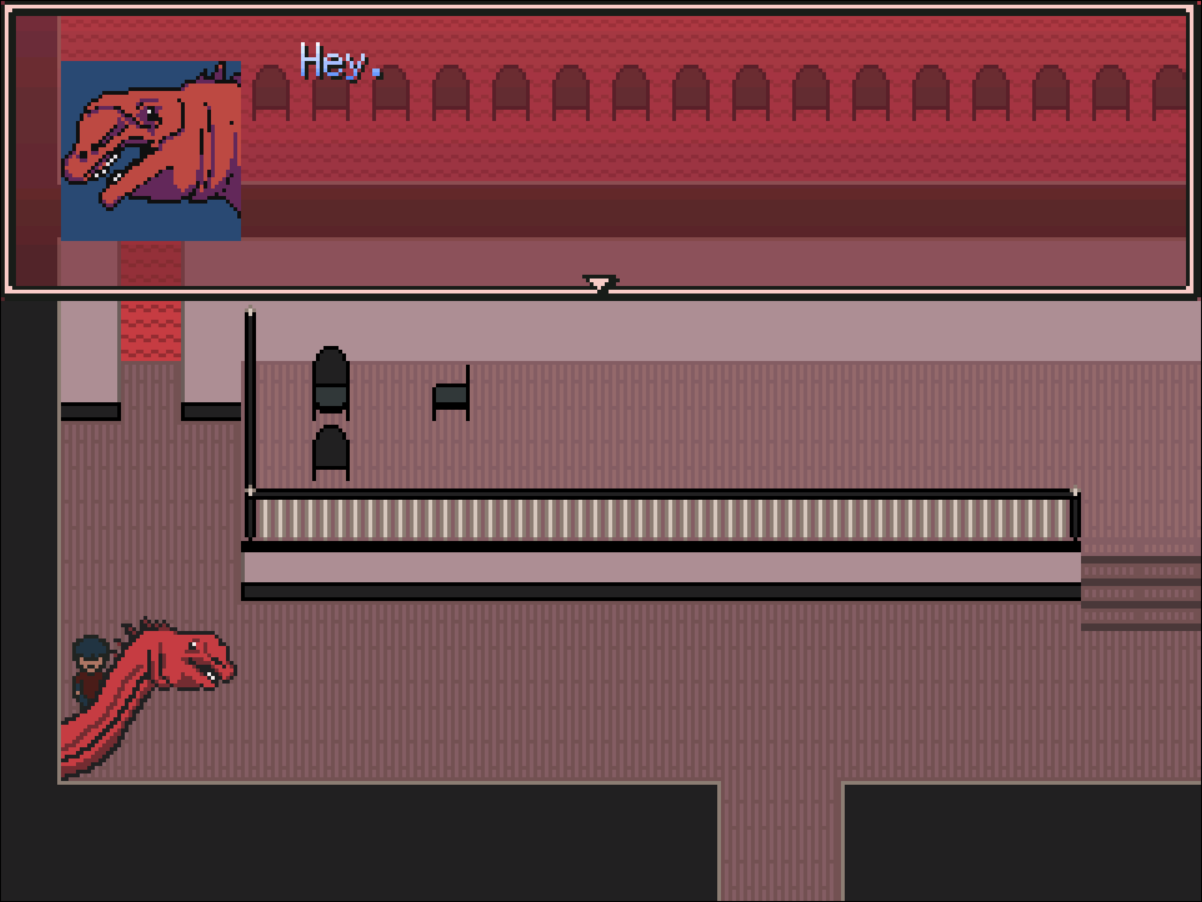 Having only had 2 weeks to make the game, creating all of the game's art from scratch required me to take some shortcuts, the most noticeable of which being that all of the characters in the overworld only ever face downward. Thematically, though, this sort of works - given the theatrical nature of the game's theme, it is fitting that the characters are puppetlike and always face the audience. I'm also suprised by how effective the quickly drawn squiggles in the battle background above give the impression of a carpet with depth- I honestly didn't expect it to work as well as it did. 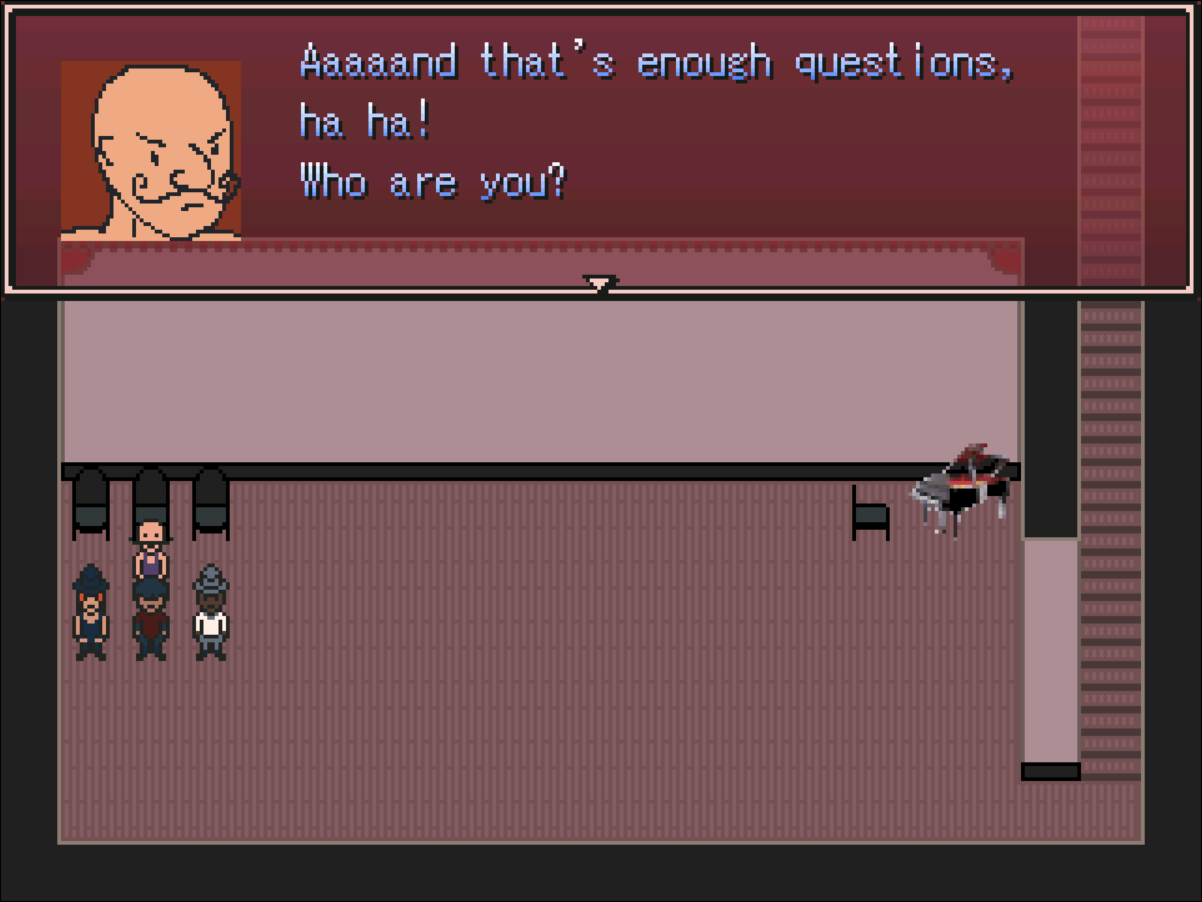 While I was hoping for the final game to only feature original assets (exlcuding some images stolen from the internet, like the piano above), the short, two-week development cycle prevented that. Thus, the game's sound effects are all default sounds that come with RPG Maker 2003. I'm not too mad about it - personally, I love the iconic "sword slash" sounds in RM2003 games. They're just really visceral and violent-sounding. Being limited to those premade sound effects also led to a couple of audio gags that I wouldn't have done otherwise. I didn't have a good sound for a ghost saying "oooooooo," so when Richard does find a ghost in the game, it instead meows.

In the end, I was able to include at least a passing reference to each of the items on fizzhog's list. While I wasn't interested in making another game with a deliberately overwhelming UI, since I already did that in American Wallrunner, I did have the last minute idea to name the performers' show the "Overwhelming UI Variety Show." The only wishlist item that didn't make the game were the "observers outside the game world commenting on it." While I had ideas for a pair of 4th-wall breaking characters who would repeatedly criticize the game, they didn't mesh well with the rest of the game's story or theming. When it became clear that I needed to make cuts to finish the game on time, those characters were the first sacrifice.

All-in-all, I'm happy with what Claire and I were able to produce in the past two weeks. I hope you enjoy it!

Finally, since we're on the topic of the Sekret Santa Jam, I wanted to feature the game that was made for me this year! It's a real good one.

My wishlist for a game, proudly enough, was: I know I literally asked for this game, but I didn't realize how badly I wanted a sapphic top-down shooter with lore incorporating utilitarian feminist philosophy and Digimon: Digital Monsters until I played it. Reader, it is uncanny to see your own personality laid so bare in a piece of entertainment media that a complete stranger made. It's unreal.

In any case, I highly recommend it! The whole thing is very tongue-in-cheek but feels very earnest. The dialogue is witty and quotable. The world-building is humorous but compelling. Exploring the desert wasteland is rewarding. And, most importantly, the game is really, really gay. Thank you again to atuun for making it!